Another Opening Day…This Time Without Predictions

It has been a while since I have written anything about the 2008 Twins. While I am excited for the start of the 2008 baseball season, I can’t say that I am particularly looking forward to following this particular team. The off season has been more interesting in terms of player movement than any in the recent history of the Twins, but overall I would grade Bill Smith’s first off season as general manager with a “meh.” My best hope for the 2008 season is that it will be what 1982 was to 1987, a year for young players to get some experience together before making a run a few years down the road.

To be clear (and at the risk of making a prediction), I don’t think this year’s version will be as bad as 1982, but a Twins fan in 2008 has significantly higher standards than a Twins fan would have had in 1982.

Here is what I am looking forward to seeing as part of my 20-game season ticket package in 2008:

-Carlos Gomez on the basepaths (assuming, of course, that he is able to get on base).

-The further development and, hopefully, emergence of Scott Baker and Francisco Liriano as star pitchers (in Liriano’s case re-emergence might be more accurate).

-The best closer in baseball – even though I think it would have made more sense trade him in the grand scheme of things.

-Joe Mauer returning to his 2006 form as the best hitter in baseball.

-Several home games against the Detroit Tigers, my favorite for the American League representative in the World Series (oops, there’s another prediction).

-Buying a Gameday Program and eating a Chicago-Style Hot Dog.

-Watching games with my 14-month-old son. 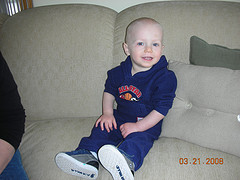 …and a few things I am not looking forward to:

-Nick Punto getting any playing time that doesn’t involve a late-inning defensive substitution.

-Ron Gardenhire talking down young pitchers and Jason Kubel to anyone who will listen.

-Inappropriate use of the sacrifice bunt.

-Dick and Bert praising the inappropriate use of the sacrifice bunt.

-An offense that scores fewer than two runs in a game.

-Joe Mauer getting blamed for not knocking in runs when he bats directly after Nick Punto, Adam Everett, and Carlos Gomez.

This entry was posted on Monday, March 31st, 2008 at 3:00 am and is filed under Little Twins Fans, Minnesota Twins 2008. You can follow any responses to this entry through the RSS 2.0 feed. You can leave a response, or trackback from your own site.