This time it was the Angels’ turn to jump on the starting pitcher early. They scored six runs off of Les Straker in the first four innings, while Kirk McCaskill was able to hold the Twins to only two runs in 7 1/3 innings pitched.

The loss ended the Twins’ five game winning streak, and pulled the Angels within 3 1/2 games of the AL West lead.

Once again the Twins scored runs early in the Metrodome and coasted to a win on the strength of a solid outing by Frank Viola in front of 47,000 fans.

The offense scored three runs in the second inning, helped mostly by a Mark Davidson 2-RBI double with two outs. As it turned out, three runs would be enough. The Twins added a few runs, including a Gary Gaetti solo shot in the sixth, but Frank Viola won his 13th game of the season by allowing the Angels only two runs over eight innings pitched.

Howard Sinker had a note in the Star Tribune:

Don Baylor, Boston’s veteran designated hitter, reportedly is available. Executive vice president Andy MacPhail said the Twins would have more interest if he batted lefthanded. “It’s hard to see how he would fit into our plans,” MacPhail said

Cantillon Fired
After three seasons, two last place finishes, 297 losses, and only 158 wins; Joe Cantillon was fired. His replacement was Jimmy McAleer. McAleer was, prior to 1910, the only manager the St. Louis Browns had. After a second place finish is his first season, 1902, the team had just two more winning seasons (1906, 1908) and McAleers final record in St. Louis was 551-632. 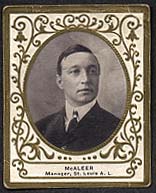 A Tradition Begins
On April 14, President Taft and his wife surprised the team by showing up for opening day at American League Park. McAleer made an off-the-cuff suggestion that the President throw out the first pitch. Taft obliged, and became the first President to do so, throwing the first pitch to Walter Johnson who took the ball and promptly shut out the eventual AL Champion Philadelphia A’s.

Busy Train
The biggest on-the-field story of 1910 was the emergence of Walter Johnson. For the past several years, the Washington pitching staff has been a strength (as much as any part of a last place team can be called a “strength”) consistently outperforming the team’s horrible offense, and finishing right in the middle of league pitching staffs. The fact that the 1910 ‘Nats were fourth in AL ERA (2.46) and third in AL runs allowed/game (3.50) is less a statement of the overall quality of the staff than an expression of how good Walter Johnson had become.

Johnson pitched in 29% of his team’s games, 27% of the innings, and earned 38% of the ‘Nats victories in 1910 while only allowing 15% of the team’s earned runs. What’s more, Johnson led the league in strikeouts, and accounted for almost half of Washington’s total.

It’s safe to say that, in 1910, the fact that the Nationals’ team pitching was better than league average was due to Walter Johnson. Take Johnson off the team and the staff becomes well below average.

1910 World Series
Both pennant races were essentially over in July, and two 100+ victory teams matched up in the World Series. Philadelphia, led by a pitching staff featuring Jack Coombs, Chief Bender, Eddie Plank, and Cy Morgan easily handled the Chicago Cubs 4-1 in the series.

2B Red Killefer .229/.318/.284 0 HR 10.5 BFW 8 WS
On August 27 Killefer, who came to the ‘Nats in last season’s Delahanty trade, laid down four sacrifice bunts in the first game of a double-header against Detroit. In his first at-bat of the second game, he does it again to become the only player in recorded major league history to bunt successfully in five straight plate appearances.

SS George McBride .230/.321/.288 1 HR 4.1 BFW 16 WS
McBride dazzled defensively once again in his third season as the anchor of the Washington infield. He also had a career-high in OBP that would stand through his entire career. 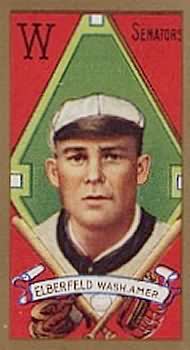 CF Clyde Milan .279/.379/.333 0 HR 2.6 BFW 23 WS
Milan equaled or surpassed career highs in nearly every offensive category in his third season as a full time player. He finished fifth in the AL in OBP due partially to his ability to draw walks. He was second in the AL in that category with 72 bases on balls.

When the A’s arrived in Minneapolis four days ago, they held a percentage point lead in the AL West race. Four days later they have been swept by the Twins and find themselves in third place in the division, behind California, the next opponent for the Twins.

Though the score was closer than in the previous three games, it wasn’t as close as it looked. The Twins scored all of their runs on four home runs. Kent Hrbek hit a three run shot in the third, the biggest home run of the day. Tom Brunansky, Tim Laudner, and Gary Gaetti all added home runs as well. All of the home runs came off of A’s starter Steve Ontiveros.

Bert Blyleven pitched six innings to earn the win, while Jeff Reardon closed the game out for his 23rd save of the year.

Another big first inning led the Twins to their third straight nine-run game, as well as the third straight win against the closest challenger for the AL West crown.

The Twins scored four in the first when the first four hitters reached safely, including a run-scoring double by Kirby Puckett and a two RBI triple by Gary Gaetti. Puckett added a home run in the third inning, and ended the day 4-4 with four runs scored and two RBI.

Steve Carlton improved upon his horrible first start as a Twin with an 8 2/3 inning, two run, six hit performance.

“That felt good,” said Carlton (6-10, 5.59), who threw 74 pitches in eight innings en route to his first victory in nine starts since beating Seattle 9-2 June 20. “I’ve been throwing a lot of pitches this year, and that’s one of the problems I’ve been having. In the ninth, I did what I’ve been doing all year, overthrowing and losing control.”

“It was frustrating (losing the shutout),” Carlton said. “I have three complete games, but not a game like this, not a shutout for eight innings. Not even close.”

For the second straight game the Twins defeated the A’s by a score of 9-4. This time the Twins put together a four run first inning off of A’s starter Dennis Lamp and never looked back, cruising to take a two game lead in the AL West.

Joe Niekro, who is in the process of appealing the 10-game suspension, pitched eight innings and allowed four runs.

Warming up in the bullpen, where Niekro (6-8, 4.38) paused once before the game to work his nails with an emery board, butterflies fluttered more than usual. He wondered about his pitching, he wondered about the crowd, he wondered whether he would help the Twins increase their lead in the Western Division.

“I was a little nervous, I really was, I’ll admit it,” Niekro said. “My knees were shaking a little bit when I was warming up. But I was fortunate that I had a good knuckleball and that it was around the plate. We scored a lot of runs. This club, Oakland, came here in first place and now we’ve beaten them twice. That’s great.

Oakland’s ace Dave Stewart allowed two runs in the first inning without allowing a hit. That, and a four run fourth inning helped the Twins to cruise past the A’s and reclaim first place in the AL West.

Frank Viola wasn’t dominant, but he pitched seven innings and allowed only three runs to earn his 12th win of the year.

Gary Gaetti and Kirby Puckett each had three RBI. Kent Hrbek and Tim Laudner each added a solo home run.

Off the field, Joe Niekro was handed a 10-game suspension yesterday by the league office, but will pitch tomorrow due to a likely appeal.

The Twins lost the final game of a West Coast road trip to the Angels. The loss opened the door for Oakland, the Twins’ next opponent, to take a slight percentage point lead in the AL West.

The Twins went 4-9 over the 13 games in Seattle, Oakland, and Anaheim. In the next two weeks, the Twins will see all three of those teams again, this time in a 14-game home stand.

The Angels jumped on the Twins in the first five innings, the biggest blow being a Bill Buckner three run home run in the fifth off of Bert Blyleven. Gus Polidor also had two RBI, while John Candelaria allowed the Twins only two hits in six innings pitched.